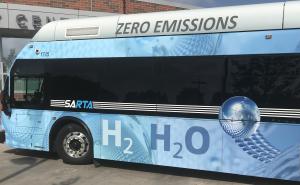 CANTON, OHIO, UNITED STATES, October 8, 2018 /EINPresswire.com/ — Kirt Conrad, CEO of the Stark Area Regional Transit Authority (SARTA), believes hydrogen fuel cells (HFC) are the future of automotive, commercial, and public transportation. In fact, he believes it so much he’s willing to lend any transit agency in the country one of SARTA’s hydrogen fuel cell-powered buses for free. All an agency has to do to is call and ask. The Central Midlands Transit Authority in Columbia, South Carolina will be the first agency to borrow a bus.

According to Mr. Conrad, the free program is being supported by El Dorado National, one of the leading bus manufactures in the U.S. and BAE which makes the propulsion system that drives SARTA’s fuel cell buses. The companies will provide free technical support and fuel for the vehicles while on loan. For more information on the program or to arrange to borrow a bus contact Timothy Montgomery, SARTA marketing administrator at 330-477-2782 x570 or tmontgomery@sartaonline.com

“Borrow a Bus was created to raise public awareness about and generate support for HFCs,” Mr. Conrad said. “Most Americans, including policy-makers and the media, don’t know what fuel cells are or how they work. Giving people across the country the opportunity to see, learn about, and ride on a hydrogen fuel cell bus is the best way to demonstrate this technology’s potential to totally transform the way vehicles are powered here in the U.S. and around the world.”

Negotiating that learning curve is important as vehicle makers and the public seek alternatives to the internal combustion engine. “Today, batteries dominate the discussion about the future of transportation,” Mr. Conrad said. “Borrow a Bus is one way to ensure that fuel cells become a prominent part of the alternative fuel, renewable energy conversation. That’s why El Dorado and BAE eagerly agreed to participate in and support the program.”

Mr. Conrad admits that fuel cell advocates have some catching up to do. “In the past, the industry’s been focused on getting the science right,” he said. “Now it’s time to tell the fuel cell story in a way that will captivate imaginations and generate increased acceptance of and support for this groundbreaking technology.”

Canton, Ohio-based SARTA provides a compelling chapter in the fuel cell story. The relatively small public transit agency will soon have one the largest fleets of hydrogen fuel cell-powered buses in the U.S. outside of California and one the largest in the world. SARTA used a combination of state and federal grants to acquire 13 buses and build a hydrogen refueling station.

“What began as an effort to achieve our goal of operating an emissions-free transit system has evolved into a multi-faceted campaign to revolutionize private, commercial, and public transportation in the U.S. and across the world,” Mr. Conrad said. “Education is a key component of that campaign and Borrow a Bus will be a great educational tool.”

Whether or not the revolution he envisions will occur is dependent on a number of factors, including attracting the public and private investment needed to build out hydrogen refueling infrastructure across the country. “Even the most ardent HFC advocates recognize that the lack of a reliable, extensive network of refueling facilities is a huge impediment to the widespread use of HFC-powered vehicles,” Mr. Conrad said. “We believe as people learn more about the advantages of fuel cells they’ll enthusiastically support the type of investment we need. We’re confident Borrow a Bus will play a major role in convincing Americans to embrace the energy of tomorrow today.”