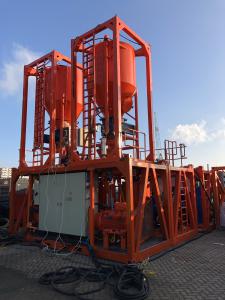 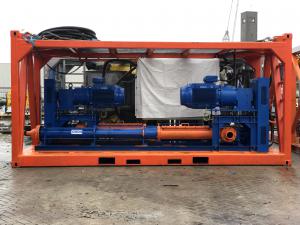 We designed and developed the RJM to meet the requirements of oil and gas, construction and renewables sectors for the execution of specialised grouting projects in challenging offshore environments.”
— Colin Reilly, General Manager of ULO Systems

DUBAI, UNITED ARAB EMIRATES, May 20, 2019 /EINPresswire.com/ — ULO Systems, a wholly-owned private company and leading provider of services within the oil and gas, renewable offshore wind and construction industries, has unveiled the latest addition to its fleet of proprietary grouting equipment – the new-generation recirculating jet mixer (RJM) and high-capacity pump.

In trials, ULO Systems’ RJM achieved a mixing and pumping capacity of up to 120m³ per hour, an output 400 per cent higher than traditional RJMs, enabling grouting works to be completed 75 per cent faster. ULO Systems designed and developed the RJM to meet the requirements of oil and gas, construction and renewables sectors for the execution of specialised grouting projects in challenging offshore environments. During the concept design, selection of components, system integration, assembly, fabrication and testing, ULO Systems placed an emphasis on output for faster execution and sustainability for a wide range of products.

“The single pump provides three times the capacity of industry-standard pumps, and a double pump performs at four times the capacity. Additionally, twin surge tanks, which can be filled from two silos simultaneously, feed cement at a higher rate. This new equipment enables our highly-trained personnel to complete grouting work at a pace never before seen.”

The new-generation RJM can grout and flush two separate annuli via its two holding tanks and water manifolds on one of the skids, while the second skid houses the pumps. Additionally, the RJM features two higher-capacity recirculating jet mixers on a single skid, facilitating higher capacities and thicker mixes. Two jets feed one mixer drum, creating a much more turbulent vortex for better colloidal dispersion of solids, resulting in a grout that will last as long as the asset’s lifecycle.

ULO Systems also incorporated features into the advanced equipment to reduce downtime and increase reliability. In addition to the high-power inverters fitted to handle excessive loading needs when working with higher capacities and flow, a third inverter has been installed as a backup in the event of failure of any of the inverters.

The new RJM and high-pressure high-capacity pump were launched recently during a demonstration for customers, including All Seas, Boskalis, GeoSea, Heerema, Seaway 7, Van Oord and Jumbo, in Rotterdam, the Netherlands. For its first project, ULO Systems’ RJM has been deployed on the Valhall Flank West Platform in the Norwegian sector of the North Sea.