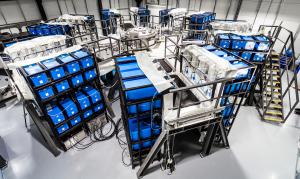 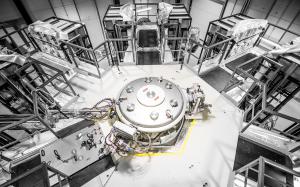 Vacuum chamber in which the firing takes place 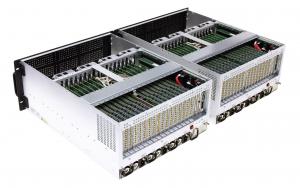 First Light Fusion is pioneering a new approach to fusion and is on target to achieve fusion gain – more energy out than goes in – by 2024.

We can clearly see a path to achieving clean energy that is simple and inexpensive within a realistic timeframe. We are driven by wanting to power a world worth inheriting by our children.”
— Paul Holligan, Head of Pulsed Power at FLF

GROSSHANSDORF, GERMANY, June 5, 2019 /EINPresswire.com/ — Fusion has long been viewed as the ultimate goal for energy generation. Smashing together deuterium and tritium atoms releases energy as they combine and is the reaction at the heart of the sun. With no dangerous waste products and a virtually limitless supply of these atoms from seawater, billions have been spent on fusion research. However, recreating the extreme conditions of temperature and pressure on earth are not easy. A British company called First Light Fusion (FLF) is pioneering a very different approach to fusion and is on target to achieve fusion gain – more energy out than goes in – by 2024. In order to achieve the conditions needed for fusion, they launch a projectile to hypervelocities at a target which requires very high levels of precision to achieve and so they selected 32 digitizers from Spectrum Instrumentation to monitor the results.

Machine 3 has been constructed to electromagnetically launch the projectiles and consists of six banks of capacitors arranged radially around a central vacuum chamber where the experiment takes place. The capacitors are charged up to 200,000 Volts over the period of a minute and the stored electrical energy is discharged in less than two microseconds. This generates up to 14 million Amps which create intense magnetic fields that launch the projectile into the center at velocities approaching 20 km a second, delivering 200 KJ of kinetic energy. FLF tested the firing of three limbs last year and has now successfully commissioned the full, six limb machine and started science experiments. Each discharge is equivalent to 500 simultaneous lightning strikes. A total of 2.5 MJ are used for every discharge and the progress made so far gives the company confidence in achieving fusion gain by 2024 which, to date, has never been done in an experiment like this.

Paul Holligan, Head of Pulsed Power at FLF, explained: “We have a different approach to the other organizations trying to achieve fusion gain. We are not using lasers or intense magnetic fields which themselves can prove to be very complicated and costly to build. By choosing pulsed power as our driver technology, we have reduced the cost and complexity in this area and, in practice, the challenge is perfecting the design and shape of the target; that is where we are establishing unique IP and developing our simulation and modeling capability. This is the new science stage. Beyond that, we can clearly see a path to achieving clean energy that is simple and inexpensive within a realistic timeframe. We are driven by wanting to power a world worth inheriting by our children.”

One of the challenges in this design is ensuring synchronicity in the firing of all six limbs that has to have nanosecond level accuracy. The electrical energy is stored in 192 capacitors that are arranged in pairs and each of the 96 pairs is controlled by a bespoke switch which is capable of holding off the voltage and transferring the huge currents involved. After the firing, Spectrum M2i.4912-exp digitizer cards (priced from $6290) are used to acquire hundreds of machine diagnostics from each capacitor and switch along with numerous probes in the limbs covering current and voltage readings with a sampling rate of 10 MS/s (100 ns time interval). 32 cards are linked together in two banks of 16 using Spectrum’s Star-Hub feature to ensure synchronicity across all 256 input channels. This configuration provides the flexibility of adding additional channels if required in the future.

“This synchronization feature was a key reason why we chose Spectrum,” added Paul Holligan. “Everything happens in nanoseconds so accuracy of firing and data gathering is paramount. We could not have any possibility of errors coming in from this equipment as every firing provides us with invaluable data and we have to be confident in the quality of that data. We looked at proposals from other suppliers and they were either hugely over specified for what we needed with a huge price to match or could not deliver the requirements we needed. I was very impressed by the attention to detail in the proposal for the Spectrum solution that made sure that the equipment was a perfect fit to our specifications. And the price was competitive so it was the obvious choice.”

Inertial Confinement Fusion
One of the founders of FLF was inspired by the pistol shrimp that clicks one of its claws in such a way as to create cavities in the water that heat as they implode forming plasma, resulting in a shockwave that stuns its prey. The precise mechanism of the collapsing is inertial confinement and is the only naturally occurring example of this phenomenon. FLF is using this to remove the complexity of needing huge containment mechanisms and focuses on managing the complexities of the implosion phenomenon to create the temperatures and pressure that match those at the heart of stars for fusion to occur. Inertial confinement means that the plasma is held together by its own inertia rather than by magnetic fields or lasers, both of which require large amounts of energy to maintain, making fusion gain much harder to achieve than FLF’s system that uses a fraction of the energy to operate. Effectively, FLF has dramatically lowered the energy produced threshold that needs to be reached for fusion gain.

The link to the Press kit is:
https://spectrum-instrumentation.com/sites/default/files/download/20190605_spectrum_digitizers_help_in_race_for_fusion_energy.zip