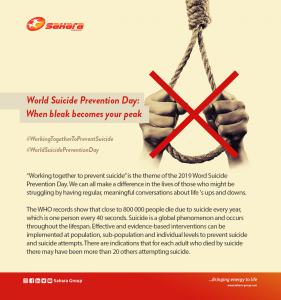 We can all make a difference in the lives of those who might be struggling by having regular, meaningful conversations about life ‘s ups and downs.

Close to 800 000 people die due to suicide every year, which is one person every 40 seconds. Suicide is a global phenomenon and occurs throughout the lifespan.”
— WHO

LAGOS, NIGERIA, September 10, 2019 /EINPresswire.com/ — I was whistling under my breath. It was a tuneless sound that bore the frustration I felt in my soul. Life was meaningless after all; an unfair odyssey I felt should not have been my lot. I took another look at the three pills on the table. It had to end this way. I had become incurably suicidal.

I had never been loved by anyone. I was never going to make it in life. I was the black sheep of the family: bearing not a single trace of the brilliance the family stock exhibited through generations. My transition will be a celebration of ‘good riddance’. The end of the road had become the beginning of a new world. Peace, perfect peace.

My heart pounded as I reached for the pills. I’d been told it would be over in 10 minutes. Then I would have eternal peace. Peace from the shame and burden of being the cursed one. Enter a life without labels and long-suffering. I could see clearly now, the maze is gone.

I paused for a moment as I thought about my father. I could never measure up to his dreams for me. I was the unfortunate offspring. His verdict was disturbingly brutal: “I have always wondered if you came from my loins. You’re incapable of doing anything right. You lack initiative and find contentment under the wings of mediocrity.” My mum’s spirited attempt at ‘mending me’ achieved nothing. I was past redemption.

At school my classmates envied me. They desired my life and wished they could have a fraction of all I had. How wrong they were! I had nothing. I was living in my hell alone. Bleak was my peak. The desire to die was my high. Drugs could not help me. I did cocktails and everything under the sun. What if I’d been sired by a different father? What if I had opened up to people who genuinely wanted to be there for me? What if I had been more circumspect about choosing my friends? What if I could turn back the hands of the clock?

Well, there was no time for what ifs now. It’s midnight for me now. In ten minutes I will be singing a new song. Bliss, here I come. I grabbed the cup with shaky hands and reached for the pills. Then everything went blank.

EPILOGUE
“Working together to prevent suicide” is the theme of the 2019 Word Suicide Prevention Day.
We can all make a difference in the lives of those who might be struggling by having regular, meaningful conversations about life 's ups and downs.

The WHO records show that close to 800 000 people die due to suicide every year, which is one person every 40 seconds. Suicide is a global phenomenon and occurs throughout the lifespan. Effective and evidence-based interventions can be implemented at population, sub-population and individual levels to prevent suicide and suicide attempts. There are indications that for each adult who died by suicide there may have been more than 20 others attempting suicide.