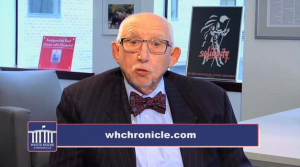 To believe that we are somehow a single entity that reacts in unison to events is to know nothing about journalists and how they work, investigate and behave”
— Llewellyn King Executive Producer and Host, White House Chronicle

Hedrick Smith is a Pulitzer Prize-winning journalist, reporter and editor for the New York Times, and author of bestselling books "The Russians," "Who Stole the American Dream?" and many others. Now, his reporter’s curiosity has led him to places like Sioux Falls, South Dakota and Hartford, Connecticut to report on efforts to end gerrymandering, remove money from politics, and fight corruption through grassroots organizing. Smith is also the Executive Producer of the PBS documentary "The Democracy Revolution: A Reporter’s Notebook,” scheduled to air on PBS in January 2020.

Smith described how 85 of 100 reporters in one Washington, D.C. bureau were all working on Trump stories.

Known as “The Black Eagle”, Joe Madison is a legendary voice in radio, and a recognized human and civil rights activist. He demands action against injustice every weekday morning on SiriusXM Radio, Channel 126, asking his audience, “What are you going to do about it?” Madison was inducted into the Radio Hall of Fame in 2019. By completing a 52-hour live broadcast, he broke a Guinness World Record and raised over $200,000 for the Smithsonian African American History and Culture Museum.

Madison described monitoring six different television channels all focused on the same political story from 6 a.m. until 10 a.m. with reruns airing that same evening all continuing to describe the story as “breaking news.”

Llewellyn King, Host and Executive Producer of White House Chronicle, began his career in journalism when he was 16 years old and his award-winning King Publishing Group published The Energy Daily for three decades along with a half dozen other publications. In his weekly nationally syndicated column for the InsideSources Syndicate, King wrote, “Politicians have succeeded in creating a mythical entity: the media, We are not a monolithic whole but a disparate, irregular army,” King says of journalists. “To believe that we are somehow a single entity that reacts in unison to events is to know nothing about journalists and how they work, investigate and behave.”

"As George Orwell wrote, and I take this from my Producer, Linda Gasparello, 'Political language is designed to make lies sound truthful and murder respectable, and to give an appearance of solidarity to pure wind.' ”

White House Chronicle is a weekly news and public affairs program, airing nationwide on 200 PBS and public, educational and government (PEG) access stations, and worldwide on Voice of America television and radio. An audio version of the program airs four times weekends on SiriusXM Radio's P.O.T.U.S. (Politics of the United States), Channel 124.