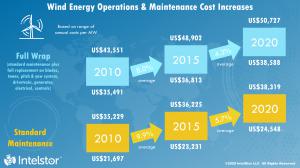 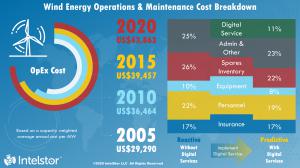 Since 2010, the average cost of a maintenance contract has increased 20.9%, driven by higher than expected maintenance costs for ageing assets

By 2025, the high end of the range for standard maintenance contracts will exceed the cost of the most expensive full wrap agreements for projects which went COD in 2010.”
— IntelStor Wind Energy O&M Cost Trends Index

HOUSTON, TEXAS, UNITED STATES OF AMERICA, February 24, 2020 /EINPresswire.com/ — The operations and maintenance market in the wind energy sector will likely see cost increases through the next 5 – 7 years as full wrap service contacts become more common, and more lucrative for wind turbine OEMs. Since 2010, the average cost of a maintenance contract has increased 20.9%, driven by higher than expected maintenance costs for ageing assets, along with a more robust scope of service. Long term service contracts inclusive of full replacement of components in the event of a catastrophic failure on parts such as gearboxes, generators and electrical systems in addition to blades (often referred to as “full wrap”) have resulted in higher rates.

There are two key drivers of these increasing operations and maintenance costs. The first is wind turbine OEMs are still using a lower turbine price as leverage in their commercial negotiations to obtain more favorable rates on their long-term service contracts. Declining wind turbine prices are resulting in wind turbine OEMs sacrificing margin on turbine supply contracts in order to sign more expensive full wrap contracts in an effort to claw back their margin. While this strategy implies a risk to the OEMs, with operational performance of the asset at 98 – 99% availability with minimal major corrective repairs should allow them to take a net positive return over the lifetime of the project.

Money which would have otherwise been saved on administrative costs, a reduction in the inventory of spare parts, as well as the time in service for equipment and personnel is instead being spent on the digital service being provided to implement that reactive to predictive maintenance transition. As a result, there is no net OpEx cost reduction at this stage, only a cost shift towards the digitally enhanced services.

As costs have escalated over time, the cost distribution has not changed, and the industry faces a challenge to ensure that spares inventory and personnel costs can be reduced as a result of the implementation of digital services.

One way in which asset owners can offset some these costs is through a royalty income stream from data licensing. Digital service companies, who can bring significant benefit to asset owners by evaluating their historical SCADA, CMS and other operational and performance data in order to improve performance and extend asset life.

These data focused digital service companies can analyze the operational history of the wind turbines and develop predictive models of component faults and failures so that more proactive action can be taken.

The knowledge these data analytics companies create serves a primary purpose to diagnose an operational or maintenance issue, but also the indirect market intelligence value of knowing when certain components might fail or the makes and models of turbines which frequently have incorrect pitch and yaw settings.

This market intelligence value of data can be monetized, and asset owners could generate significant royalty income from the licensing of this data, which would partially offset the growing cost of maintenance.

Proactive asset owners, OEMs, or insurance brokers with reams of asset reliability and performance data who out-license or cross-license their data could collectively see a total royalty income upwards of US$845 million in recognized commercial value for the data they own or control in the United States market alone.

This underscores the need for a data and digital content exchange to facilitate such licensing transactions. In the past, asset owners, OEMs or independent service providers had no commercial incentive to share their data with other companies. This resulted in most companies stockpiling a significant amount of SCADA, CMS and other data while being highly reluctant to share it for fear of liability exposure on warranty claims.

However, most companies would likely share more of their data if they were offered a royalty for licensing it, instead of just giving it away to a data pool in order to get access to other commercial data which they might not fully utilize.

The market is there for asset owners to achieve cheaper long term service contracts through commercializing a portion of their asset performance and reliability data. They need to seek the right partnerships with data analytics companies who can add value to them.