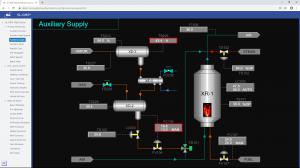 Highly interactive and high performance displays can now be converted to unprecedented compact and fast HTML5 code for Web Deployment in the Cloud.

Since 1983, SL-GMS has evolved from UNIX to Windows and Linux, from 32-bit to 64-bit native, and from C++ to ActiveX, Java, and Microsoft .NET, providing the highest value for long-lifecycle Advanced Control Systems. Dynamic graphics models, created with the SL-GMSDraw editor, are upwardly compatible and reusable between different platforms and frameworks.

Now with the new SL-GMS Web/Developer product, the same graphic displays developed with SL-GMSDraw can be Web deployed in a Cloud using HTML5 and JavaScript.

The same graphic displays in Control Rooms can now be deployed in a Cloud and displayed within a Web Browser as smoothly as the local deployment, on a heterogeneous range of devices such as PCs, tablets and smartphones.

SL-GMS and its Custom Editor option have been embedded and provided in over ten thousands of mission critical systems in control rooms and centers globally for process control, facility and network monitoring, traffic control, and aerospace/defense.

SL is a San Francisco Bay Area-based software company that develops and markets real-time monitoring, visualization and diagnostic software for Global 1000 and mid-market companies whose businesses depend on complex, high-performance applications or control systems.