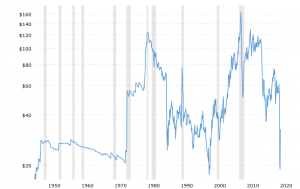 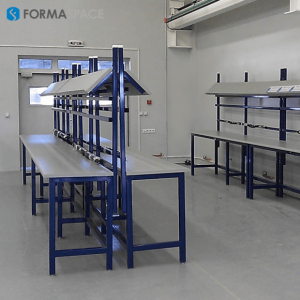 Tip: Formaspace makes chemically-resistant workbenches for use in oil and gas refineries and testing labs. 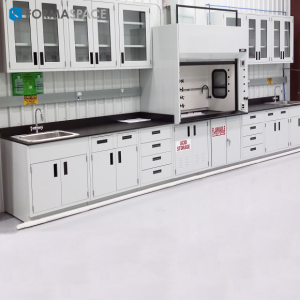 As the economy restarts, will the energy markets be changed forever? Probably so. Let’s take at what we can anticipate in the coming weeks, months, & years.

As economic activity has come to a near standstill during the height of the Covid-19 lockdowns around the world, energy demand has fallen precipitously.”
— Formaspace

One look at the postwar price chart below tells the story – the coronavirus pandemic has led us into an oil price collapse, the like of which has not been seen since 1986 and 1998.

As economic activity has come to a near standstill during the height of the Covid-19 lockdowns around the world, energy demand has fallen precipitously.

– According to analysis from the International Energy Agency (IEA), published in their 2020 Global Energy Review, the first quarter saw electricity demand drop by 20% or more.
– Airlines, a major consumer of jet fuel, have been hit especially hard. Seat capacity has been cut by 70% or more as airlines eliminated scheduled routes or converted any remaining flights into all-cargo operations.
– Demand for gasoline fell as drivers followed stay-at-home orders and commuters began working from home. Traffic on California freeways dropped as much as 55% while Uber reported its ride share bookings were down 80% in April.

Unprecedented Confluence Of Events: Sudden Drop In Demand For Oil Amid An Energy Price War

The sudden collapse of demand for energy quickly created a crisis of its own: where to store all the oil and gas being produced around the world.

Despite this, major producers Saudi Arabia and Russia continued with normal production levels even as prices were falling, hoping to increase market share at the expense of more costly US shale production.

Things finally came to a head when futures traders began to take into account that operations in Cushing, Oklahoma (home to North American’s oil pipeline hub) might grind to a halt, unable to cope with the excess capacity.

The results were dramatic: Oil futures momentarily went into negative territory – in other words, producers would have to pay someone to take oil off their hands.

You’ve probably heard the old business finance joke, but it bears worth repeating here: “We sell each widget at a loss, but we make it up in volume.”

It’s true, you can’t make money selling product at a loss for an indefinite period of time.

The logical response to the collapse of oil prices would have been to stop production. Yet, as we mentioned above, both Saudi and Russian producers hoped to leverage their lower production costs into greater market share at the expense of American shale oil production, whose extra production steps (due to fracking processes, etc.) make it more difficult to earn a profit when the price of oil drops below $40.

The idea of shutting down wells was especially unpalatable for US shale oil produces, something that producers wanted to stave off as long as possible. Shutting down an oil well is expensive (workers need to be called in to safely cap a well that’s taken out of production), and once a well has been taken out of production, there’s no guarantee it can be reactivated at a later date to produce the same amount of oil and gas prior to the shutdown.

This is especially true for fracked wells commonly used for extracting shale oil and gas. You can think of the fracking processes as something similar to frothing milk for a cappuccino: injecting wells with high-pressure fracking fluids can create a productive well, but once the well has been shut off, it’s hard to “froth” it a second time.

Nonetheless, the US oil industry was forced to start the unenviable task of shutting down oil wells, which, in turn, has led to record job losses across the oil patch.

Has The Energy Market Become A Game Of Survival Of The Fittest?

Is it fair to describe the high-stakes energy market as a variation on the popular Hunger Games television series, where the lowest production cost producer wins?

The crisis seems to be accelerating some of the ongoing trends that existed prior to the pandemic.

For example, the sudden collapse of demand for energy has been especially tough for the coal industry, which produces a fuel that’s more expensive for electricity producers to use. The IEA’s 2020 Global Energy Review (mentioned earlier) says Q1 demand for coal dropped nearly 8% over 2019. This is bad news for a sector that was eclipsed by renewable energy sources for the first time last year (and renewables are on track to repeat this feat again in 2020).

Renewables are indeed on the rise, with the IEA predicting low-carbon electricity sources* will reach 40% of global energy generation this year, albeit at a lower total for 2020, as the IEA estimate overall electric demand will be down 5% (assuming an economic recovery later in the year.)

(Some analysts think the uptake for renewables would have been even higher in 2020, but the lockdown prevented many residential solar energy projects from moving forward.)

In response, proponents of oil and gas in Washington are taking action to help oil and gas companies reduce the cost of domestic production. Federal regulators have proposed reducing lease payments and reducing royalty rates (or delaying payment deadlines) for drilling on public lands. Washington may be looking at making things more difficult for the solar industry as well, such as taking over the regulation of subsidies for solar power from the states.

Lesson From The Pandemic: Major Changes Can Happen Quickly

The dramatic reduction in electricity production and vehicular traffic during the coronavirus lockdown has led to unexpected changes over the course of a few short weeks.