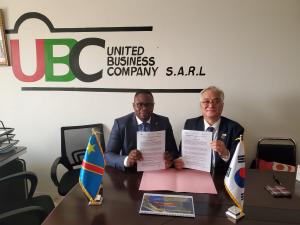 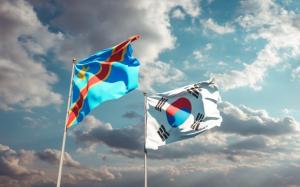 The Democratic Republic of The Congo and South Korea 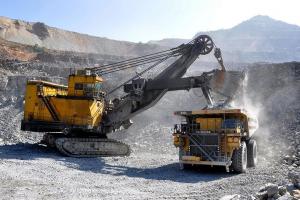 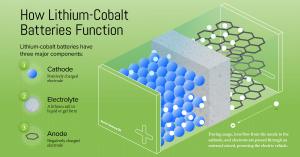 Mealtop, largest shareholder of Korea Kosdaq listed Melfas, signed a contract worth US$945M in cobalt and US$575M in copper over three years with DR Congo.

This contract between UBC & Mealtop is the fruit of effort to establish a network of new businesses that have been pursued in major overseas countries such as DR Congo, Italy & Middle East since 2019.”
— Representative Chairman Keun-Young Kim

KOLWEZI, LUALABA, DEMOCRATIC REPUBLIC OF THE CONGO, September 15, 2021 /EINPresswire.com/ — Mealtop, which recently became the largest shareholder of Melfas Co., Ltd., an electronic component manufacturing company listed on Kosdaq, has embarked on a new chapter with precision focus on the overseas resource supply business to prepare itself for the anticipated demand of mineral resources needed for the much awaited E-Vehicle industry revolution. Unlike most of the overseas resource projects of domestic companies in Korea, which were previously regarded as failures as they were focused mainly on processing of mineral ore's, the present contract with Mealtop is for supply of 100% finished Cobalt and Copper

We can proudly finally announce today on 14th September 2021 that Mealtop signed two large-scale resource supply contract with UBC(UNITED BUSINESS COMPANY SARL), a mining and construction company in Democratic Republic of The Congo on the 11th September 2021 for Copper and for Cobalt on the 13th September 2021 said board main member Sung Moon Kim.

The contract between the two companies is a contract directly signed with a local distributor in Democratic Republic of the Congo, with no brokers involved. Expectations are bench marked very high as this is a contract for the supply of finished products, not the mining processing of mineral ore.

Until now, most of the overseas resource projects of domestic Korean companies have been focused on the mining development, which requires large-scale investment. In the case of these overseas mining developments, they have often ended in failure because their profitability was not high as they incurred exorbitant mining costs and long turn-around time. However, since this contract is a structure that supplies and sells finished mineral products that have been processed, it is expected that the risk now is relatively low and it will be possible to generate profits within a short period of time. In the case of cobalt and copper, which are currently hot resources worldwide, the fact that the market has been controlled mainly by sellers as demand exceeds supply is also much now in our favor as we are The Seller!.

Mealtop is extremely confident as it has already received letters of intent to purchase from mineral resource buyers based in the UK, after signing a supply contract with UBC and securing buyers in the global market too. Before the end of this year, Mealtop plans to supply finished copper, a raw material for various industries, and finished cobalt, a core raw material for batteries, to the domestic and overseas markets.

The rise in the price of cobalt due to the rapid increase in demand for electric vehicles and the price of copper, which is an essential raw material for electric motors, are clear this year. In addition, as the global competition for securing is fierce enough to be called a war, it is evaluated that securing the currently contracted finished product is highly likely to lead to great business results.

"This contract between UBC & Mealtop is the fruit of efforts to establish a network of new businesses that have been pursued in major overseas countries such as DR Congo, Italy & Middle East since 2019." said Representative Chairman Keun-Young Kim And "As a small and medium-sized company in Korea has achieved large-scale overseas resource supply contracts, we will continue to supply raw materials with high profitability other than cobalt and copper through the pioneered overseas network." He added, “As Melfas, a recently acquired KOSDAQ listed company, has focused on the touch panel business, it is also worth looking forward to sufficient synergies centering on its core competencies in the electrical and electronic fields.”

Mealtop through its local partner WTIA RDC has wisely secured this large scale contract entirely through L/C funding which is a major plus point as no cash flow or large funds will be blocked besides being finished goods, the product from DR Congo to end Buyer in Korea is quick hence addressing the always painful cash-flow issues which companies in the traditional mineral mining business always face great up-hill rides against.

Indeed, it is worth to keep eyes on them carefully whether Mealtop's efforts over the years will work with Melfas, a Kosdaq listed company in which Mealtop became a major shareholder to blossom and write a new history in which large-scale sales and profits from resource sales are just by the horizon.

The world has a viable pathway to building a global energy sector with net-zero emissions in 2050, but it is narrow and requires an unprecedented transformation of how energy is produced, transported and used globally, The key factor in achieving success is securing the right mineral resources necessary for a ‘green economy’. According to the forecast of the International Energy Agency (IEA) at the end of April, the number of EVs worldwide will reach at least 145 million conservatively but ambituously targetted at 230 million units by 2030. The rationale is also clear. It is a declaration of ‘carbon neutrality’ by countries around the world, including the United States, Korea, Japan, and the European Union (EU). In particular, in order to dramatically reduce carbon emissions, it is necessary to promote the production, distribution and consumption of electric vehicles that do not emit carbon.